This web does not use third-party cookies. By continuing to browse the site, you only agree to use our minimal set of operating and statistical cookies. Find out more about it here.

#dddc Because data and democracy are everyone's issue

The final version of the Data Commons Manifesto, resulting from the DDDC participatory process, can be found here.

Digital Democracy and Data Commons is a pilot participatory process oriented to test a new technology to improve the digital democracy platform Decidim and to collectively imagine the data politics of the future. This pilot takes place in the context of the European project DECODE (Decentralized Citizen Owned Data Ecosystem) that aims to construct legal, technological, and socioeconomic tools that allow citizens to take back control over their data and generate more common benefits out of them. The pilot is led by the Barcelona Digital City (Barcelona City Council) and the Internet Interdisciplinary Institute of the Open University of Catalonia (Tecnopolitica and Dimmons), in collaboration with the Nexa Center of Internet & Society, Eurecat, CNRS, Dribia, aLabs, Thoughtworks and DYNE.

What is the DDDC pilot?

Digital Democracy and Data Commons is a pilot participatory process oriented to test a new technology to improve the digital participation platform Decidim and to collectively imagine the data politics of the future. This pilot takes place in the context of the European project DECODE (Decentralized Citizen Owned Data Ecosystems), that aims to construct legal, technological and socio-economic tools that allow citizens to take back control over their data and generate more common benefits out of them.

Why is it important?

To reveal some data about our lives to some application may not look so serious; the problem arises when those chunks of data are aggregated in our devices, services and accounts to be analyzed, shared and sold. All that information constitutes digital patterns that reveal behaviors, interests and habits of the digital society. Many actors, specially big corporations and States, use that information to surveil and influence our lives, through strategies that go from continuous advertisement to intervention in political processes (such as in the Cambridge Analytica case) up to generating citizen rankings (such as in the Chinese case).

Nowadays there still is little awareness, deliberation and participation of citizens in the definition of the data politics that shape this new digital economy. This pilot initiative tries to stir critical consciousness and common construction in this arena. Furthermore, it aims to provide with the tools to build in that direction.

What is DECODE and how does it relate to the DDDC process?

The DDDC pilot will test the technological tools created by the DECODE project.  DECODE is a European project that is creating technological, legal and socio-economic tools that allow people to have greater control over their data and obtain greater collective benefits from them. If you want to know more about the project (the partners, their funding, etc.) or about the development of the tools, you can browse the project documents on different planes, legal, socio-economic and technical (see "related documents" below), the FAQs or the official website.

What are the goals of the DDDC pilot?

The pilot will have several complementary goals:

What is the structure of the process?

This participatory pilot will have a total duration of six months and will be developed in several phases, which will run between October 18th 2018 and April 15th 2019. Throughout the process, different face-to-face meetings will be held, connected with the activity developed in the dddc.decodeproject.eu platform. 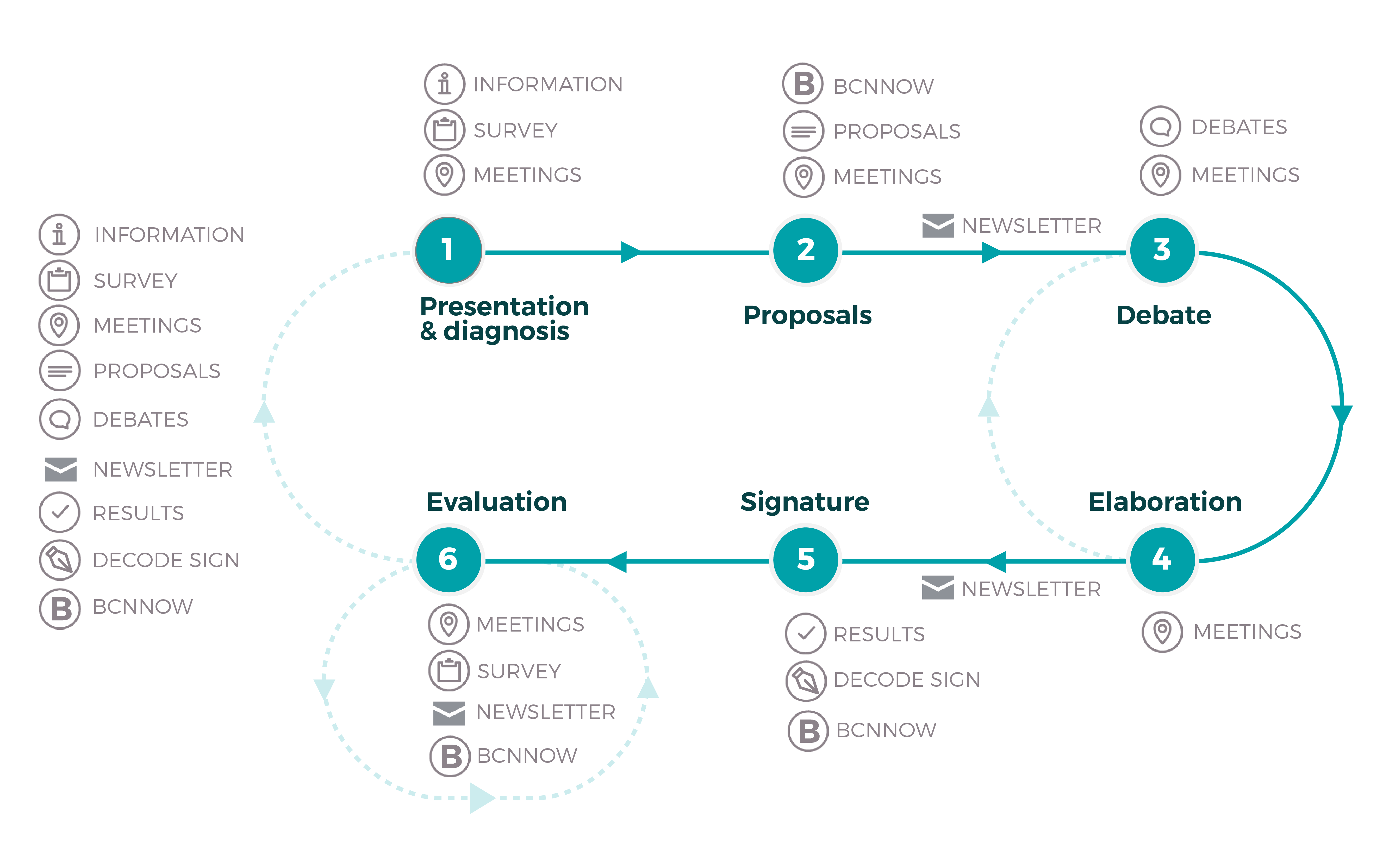 Throughout these phases (especially in face-to-face meetings), discussions will be organised around three main axes: legal aspects, governance aspects, and economic aspects. Although they have clear connections between them, each of them provides a differential approach to discussions around data. One of the results of the process will be a participatory manifesto around the digital economy. A fourth axis of the pilot, the experimental axis, will be dedicated to use and take collective decisions around the database resulting from the data (in particular, the anonymized socio-demographic data) shared during the pilot, constituting a temporary commons that will serve to improve the deliberative process itself, a practice that could be incorporated in Decidim processes in the future.

You can participate both digitally - through the DECODE | DDDC platform - and face-to-face in the workshops and meetings that will take place.  In the platform you will be able to find out about different participatory processes underway and see, propose, evaluate and share proposals. To do so, all you have to do is sign up at the following link. If you still have any doubts or unresolved questions, you can send your query to dddc@decodeproject.eu.

Survey conducted among participants of the first phase of the DDDC pilot with the objective of increasing the inclusiveness of the process.

This document includes readings associated to each of the DECODE symposium sessions, proposed by the participating speakers. The symposium took place at the Center for Contemporary Culture of Barcelona, on October 16 and 17, 2018.

This document includes readings associated to each of the DECODE symposium sessions, which took place at the Center for Contemporary Culture of Barcelona, on October 16 and 17, 2018.

Me, my data and I:The future of the personal data economy pdf 1 MB

This is Nesta’s first report for DECODE (DEcentralised Citizen Owned Data Ecosystem), an EU funded project that will create tools that put individuals in control of whether they keep their personal data private or share it for the public good. We need to think about data differently, moving away from ideas of data as a commodity to be bought and sold, and more as a common good that can deliver significant personal and public benefits.

Documents related to the legal framework

This document provides a review of the licensing options for digital data commons, including for the case that data commons include personal data.

The report presents an analysis of the technical features of the DECODE technology, followed by practical guidelines for the design of the DECODE OS and the DECODE smart rules syntax.

Documents related to the economic framework

Synthetic report that diagnoses the current staet of economic activity around data.

Economic and regulatory analysis of data platforms and value creation models of the on demand economy pdf 9.71 MB

This analytical work is essential to be able to by propose in our future work economic, regulatory, and technical alternatives to the dominant, centralised and monopolistic economic models of data-driven platforms, which exploit network effects and capture rent from network externalities, thus hindering innovation and eroding citizens’ digital sovereignty.

This work primarily will provide a commons balance of the platform collaborative economy. The commons balance is an analytical tool that helps to characterize the platforms, differentiate models by visualizing the commons qualities of platform collaborative economy initiatives, and provide insights of the sustainability implications of their design and performance from several perspectives. This commons balance considers the dimensions of governance, economical strategy, technological base, knowledge policies, and social responsibility towards the externalities of the platforms.

Documents related to the governance framework

The document intend to identify relevant areas for research in the domains of attribute based cryptography, identity management and distributed ledgers. An overview of current state of the art technologies is provided and, when available, references to software implementations of these technologies as relevant to DECODE are included

In this work we carry on two main tasks. Firstly and more importantly, we outline a preliminary framework for the democratic governance of distributed ledger technologies (or blockchains) such as DECODE. Otherwise, we focus upon the connection between social actors and DECODE technology, attending primarily to software.

Documents related to the technological framework

Survey of technologies for ABC, entitlements and blockchains pdf 578 KB

This document presents a survey of data entitlements, blockchain techniques to provide appropriate options for DECODE use-cases, and privacy technologies (such as Attributed Based Credentials) relevant to blockchains.

This report describes the work to design the first version of the DECODE architecture.

This folder gathers the documents sinthesizing the results of face to face meetings of the pilot.

This document presents the structure and results of the face to face meeting of proposal production of the DDDC pilot at the Sharing Cities Summit, which took place on November 14th, 2018.

Results of the first DECODE workshop, aimed to create a diagnose on regulation, economy and governance in relation to challenges within digital society.

Meetings - Past meetings See all (9)

Official proposal
In the face of this, we declare that
View proposal

Official proposal
As a result, our individual and collective rights, and the very shape of our lives, are...
View proposal

Official proposal
Although we produce data we do not control it. Data controls us. More precisely: who controls...
View proposal
See all (22)

Self-education on data management and protection

dddc oficial
Civil society actors should educate ourselves and others on data management and protection issues...
View proposal

dddc oficial
Researchers could promote the use of licenses that could be compatible with community commons....
View proposal

Please paste this code in your page: